This past Sunday, I had the pleasure and honor of attending a once a year Gala dinner like none other –  the 12th Annual Flavors of San Diego Gala. Perhaps a strong statement but with good reason. The American Liver Foundation holds its signature event at the swanky, Forbes five-star and AAA five-diamond hotel, the Fairmont Grand Del Mar. Proceeds directly benefit the non-profit organization, which helps fund treatments for liver and gallbladder disease which can affect pretty much anyone. 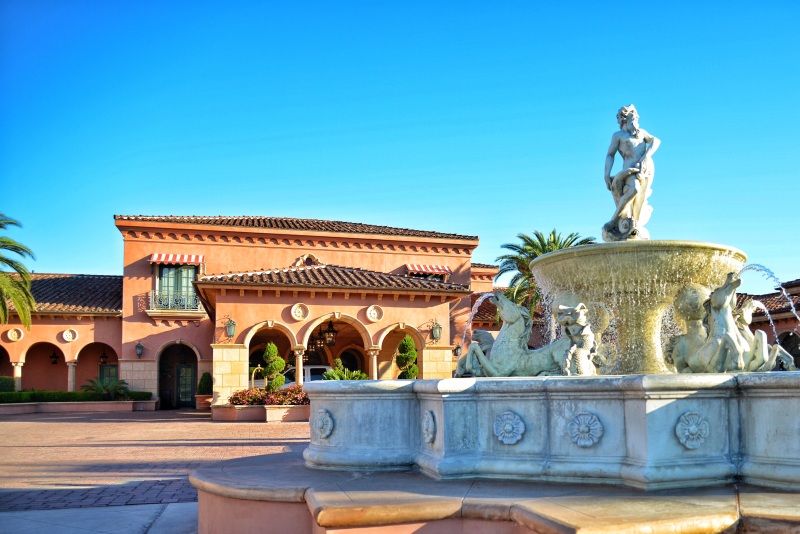 Just a short drive from any given point  in San Diego, the Fairmont Grand Del Mar transports you in time and place back to old world charm. The event showcases more than 25 of San Diego’s premier chefs, restaurants and sponsors. 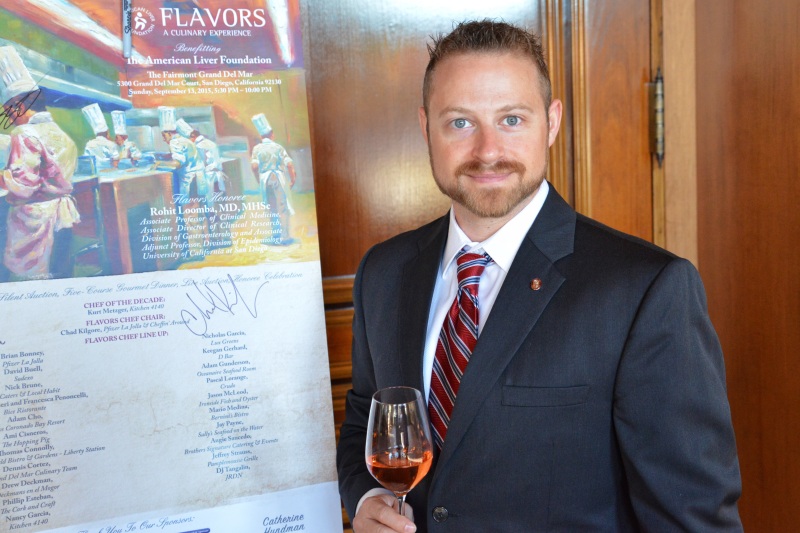 I attended the event along with sponsor Quigley Fine Wines and their own Mike “The Wine Guy” Blatt. The name should be familiar as they team up with a slate of chefs and restaurants around San Diego for charitable and one-of-a-kind events! Based in Oceanside, Quigley Fine Wines has established itself as a local wine powerhouse importing sustainable, small production, artisanal wines and sponsors events such as Flavors of San Diego, for which they donated over 100 bottles! QFW believes that, like food, people want to know the story behind their wines – Where it comes from, how it’s grown, and how it impacts one’s health and our environment. Head Wine Consultant/Storyteller for Quigley Fine Wines, Mike “The Wine Guy” shares their philosophy.

1. What makes QFW stand out?

Nobody else in the United States has these wines. That’s the 1st thing. The fact that nobody else has them, makes not only us unique, but our clients are part of an exclusive experience. When their friends come over to their house or they bring a bottle of wine to a dinner, everybody is going to taste it and say “Where did you get this?” It’s the exclusivity that we pride ourselves on. And if for some reason our bottle is somewhere else in the U.S, it’s probably somebody who went to visit the vineyard that brought the bottle back.

2. Talk to us about Vineyard to Table philosophy at and how you carry it out?

Everybody wants to know where their food comes from, but very few people have stopped and said “Hey, where the hell do my grapes come from?”  When you pick up a bottle of red that says California Red, you have no idea where those grapes came from. What part of California or what else is mixed in? We know who our winemakers are, we know who’s growing these grapes.

4. How did QFW wines become involved with ALF?

Chef Chad Kilgore and I met at the S.D. Zoo Culinary Gala. He was at the table next to ours. We shared a bottle of wine, and after the first glass he said, “This wine is really good! Who are you? What do you do?”… That’s where it all began. He  called me a few days later and explained how he was involved with the ALF and we agreed that QFW would be a perfect fit. Quigley first partnered with the ALF this year at the Loews Coronado event in Feb. which was fantastic and we met some great chefs… And that led to our wine sponsorship of the Flavors event coordinated by Kristen and Michele of the American Liver Foundation. QFW supports a lot of events around town. I would say about 90% involve a charity. This is a way for us to give back to our community in San Diego.

5. Tell us about the extent of your involvement along with what chefs/restaurants you sponsor?

In terms of some of the chefs in San Diego that QFW partners with. First and foremost there’s Tony & Chef Mimo at Baci Ristorante. We partner with Chef Mark Bolton at Lionshare, Chef Mario Cassineri from Bice, Chef Luke Johnson formerly of the Red Velvet, Chad Kilgore of Cheffin Around, Mikel Anthony of Savoie. My newest collaboration on the horizon is with Chef Jason McLeod of Ironside Fish & Oyster. Also, we are going to be doing our quarterly dinner “Harvest of Fall” with Chef Kurt Metzger at Kitchen 4140 supporting his charity on October 19th. We love Kitchen 4140 so much that booked the wine room for our holiday party!

6. Can QFW be bought at stores?

No. As the importer and representatives of small, family owned vineyards, Quigley Fine Wines gives access of our wine to individuals directly. Biodynamically produced and sustainably farmed, these are the wines that do not have added preservatives so often found in wines on the store shelf. We store them in our temperature controlled warehouse in perfect cellar condition until they are ready drink.

Vino in hand, guests enjoyed their time in the Cathedral of The Grand Del Mar.

As the reception came to end, the chefs came forward  to greet their dinner guests setting the tone for a phenomenal evening. 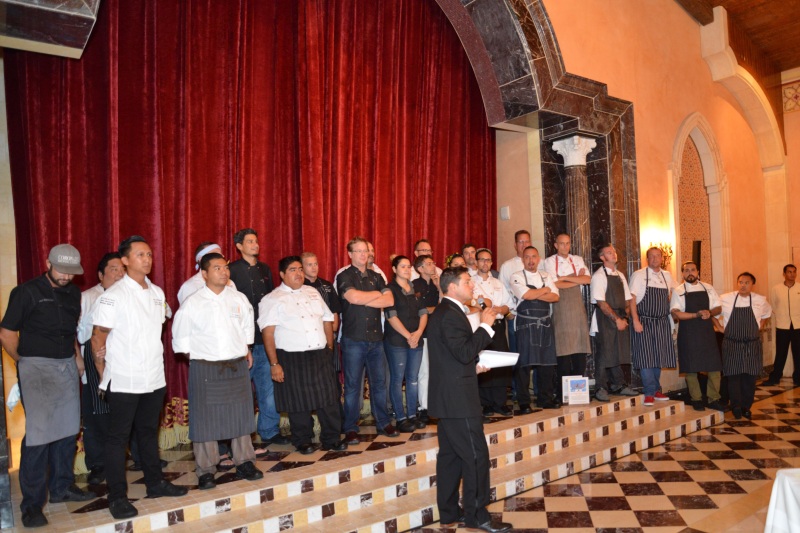 As we entered the ballroom breathtaking center pieces and decor adorned each table, each one different from the next, and conducive to unleashing our inner foodie. The chefs, the wine, the decorations all designed especially for the table of ten guests – Award winning culinary rockstars preparing topnotch, wine-paired, multi-course dinners. 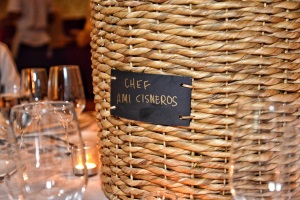 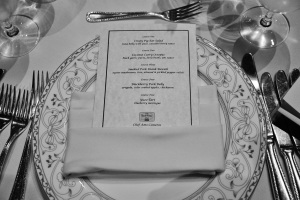 We were lucky enough to be seated with Chef Ami Cisneros. Since graduating from the San Diego Culinary Institute in 2010, she’s worked with some of the best chefs and kitchens in San Diego, including World Food Championship Chef Ricardo Heredia, eventually landed at The Hopping Pig as Executive Chef. Ami sources local produce and seafood to showcase her craft. Fresh off her win of the Octopus Challenge at the Latin Food Festival in San Diego, you could say I was pretty excited that she would be our chef!

1. How did you become involved with the Flavors of SD Gala?

Chef Daniel Barron is the one who got me into it. He’s busy with Blush and he knew he wouldn’t be able to participate. But he believed in me and my food and wanted to make sure I was part of it!

2. What was your inspiration for the dinner?

I knew I wanted to do pork for one the dishes, because that’s what I do at the restaurant…I’m very pork-centric, but I didn’t want to make the dinner to heavy. When I was at Beaumont’s we did lots of seafood, so I wanted to showcase good seafood along with pork.

3. Have you always known you wanted to be a chef?

No. I actually wanted to be in business, but I kinda got bored. But I had a friend who’s a chef now, and he was in Culinary School, and I really liked the direction that he going in. And I’ve always felt most comfortable in my kitchen… So it worked out for me!

4. I know that we can catch you at The Hopping Pig and The Michelada Madness & Tostada Throwdown at the Quad Ale House on the 11th, but what other events can we see you at?

I have 3 events in October, it’s going to be a busy month. 1. I have the Heavenly Hog Fallout Dinner at Blush on the 12th, and it’s going to be EPIC! Chefs Daniel Barron, Chad White, Hanis Cavin, Karen Blair, Rose Ana Peyron are some of the participating chefs. Its going to be 10 courses! 2. I’m also doing the “ Harvest of Fall Dinner” at Kitchen 4140 on the 19th, with Kurt Metzger, Jojo From Ironside, Rose, Alex Emery… That’ll be lots of fun too!

5. Talk to me about the process of tying your food menu to the availability of local resources and purveyors.

I was raised in kitchens where that’s just what we do. Working with Stefan at Mr.A’s. he was at Chino Farms every morning picking out our produce, and with Ricardo, establishing relationships with farmers. Every restaurant I’ve worked at that’s the standard now. I make everything down to the French fry ketchup at our restaurants. As restaurant we need to support our local farmers. We need to make sure we support each other.

6. Are you planning on following in the footsteps of your previous mentor, Chef Ricardo Heredia as World Food Champ?

I think I’m a bit away from that right now, professionally. (She laughs ) Ricardo is a ninja. He’s like the guy from Game of Thrones…The Man of Many Faces… I’m just glad I have him in my corner.

7. How do you see yourself contributing to the community long term as a chef?

Giving back to the community… I think that The Flavors Gala was the first step right direction when it comes to that. We need to really support our community and each other, and give back to good causes. And as Chefs we do our part. It’s good to give back.

As the dishes rolled out, so did Chef Ami with her inspiration behind the dishes which I relish so much. It’s as though I’ve eaten twice! 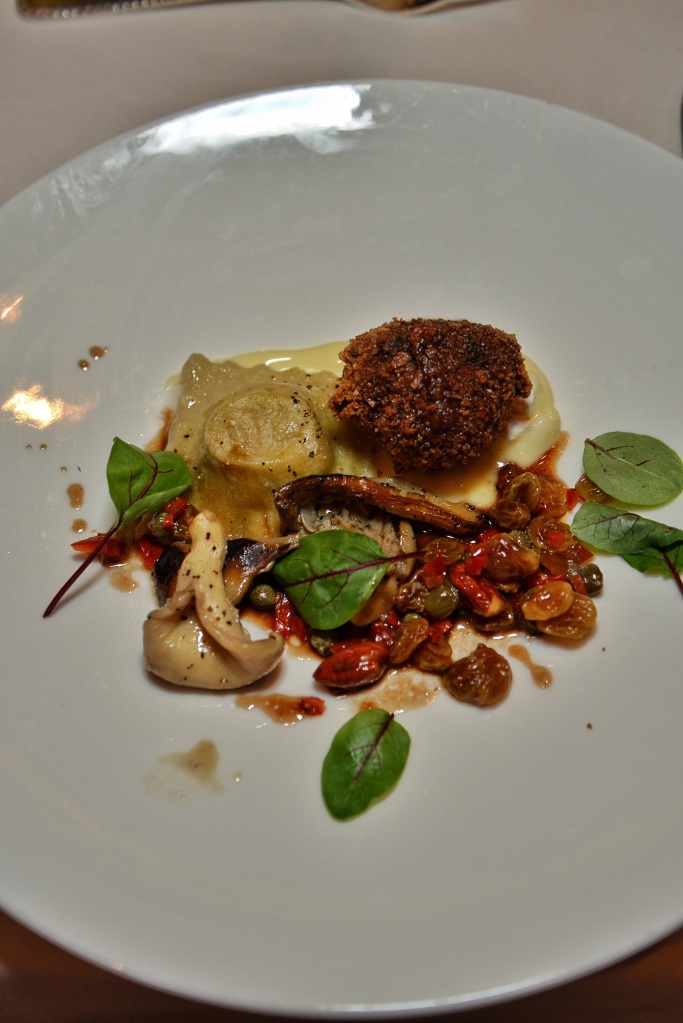 Mike and Beth Fraitag, excelled in overseeing several tables.  With her easy-going, informative, and pleasant manner Beth described the wines and grapes,  sourced from 90 year old vines, giving us a in-depth perspective. Sample, sip, and savor!

Executive Director of the ALF, Michele DeMotto started off the program by recognizing the first honoree, Dr. Rohit Loomba, or “The Rockstar of Hepatology” for his work with the American Liver Foundation, Dr. Loomba was honored for his cutting edge research in liver disease focusing efforts on non-invasive biomarkers.

Also in attendance was honoree Chef Kurt P. Metzger of Kitchen 4140, awarded Chef of the Decade for his work with the ALF spanning more than a decade. Michelle DeMotto, longtime friend, and presenter of the award said – “He’s been an invaluable person who’s made this event possible for over a decade. Truthfully, I don’t even know how many hundreds of thousands of dollars Chef Kurt has helped us raise. Between his own money that he’s donated, accessing his own personal rolodex, calling in favors from all corners of the earth, himself personally getting 1,2,3 tables for this event every single year…” 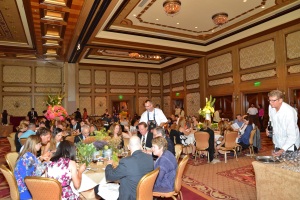 The funds that were raised through the event will be used for research, to advocate and promote education, as well as prevention, treatment, and cure of liver disease. To learn more about the American Liver Foundation, visit http://www.liverfoundation.org