This Thursday June 18th at 6pm, savor a tantalizing 5 course dinner prepared by none other than Chef Martin San Roman, paired with award-winning innovative wines by Torres Alegre at Dobson’s San Diego.

Chef San Roman counts 250 awards from 12 different countries. Additionally, he was the head chef in charge of gala dinners for the Mexican Presidency and member of the Mexico Culinary team in the Bocuse D’Or World Cuisine Contest, to name but a few. 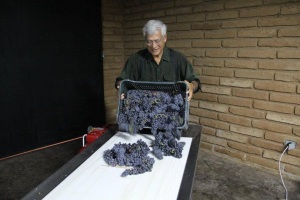 Also Mexico city born, Victor Torres Alegre originally graduated as an agronomist. He subsequently received his doctoral degree in Oenology from the University of Bordeaux in France, and currently is the only one recognized with said designation in Mexico.

He is a published innovator in terms of wine elaboration, determining in 1982 that the optimum temperature for the development of the white wines is 18 °C, contrary to the 10 °C which had been the longtime status quo.

In addition to serving as judge for the prestigious International Concour de Bruxelles, he currently serves as an adviser of the “International Competition Ensenada Wine country”, as well as professor of Oenology at the Autonomous University of Baja California. His experience at Lafitte Cork and capsule. Alain Fouquet Chatêau Camou, and Baron Balche serve him well in his Torres Alegre and Family’s most recent venture.