27 Chefs, 35 Ranchers & Growers, 39 Artisans, countless volunteers, writers, activists, 2 gracious hosts and a tireless committee, all local, came together for an invite-only dinner at a seven acre plus estate over-looking Black’s Beach in La Jolla. Sounds like a phenomenal night? Well it was, but even more remarkable is the story behind it. The Berry Good Night Dinner, now in its sixth year, is a space and place where people come together to form friendships, relationships, and engage in important conversations. Hosted by founder Michelle Lerach and her husband, Bill, she’s been instrumental in bringing together this impressive group of people into their home for a unique night. 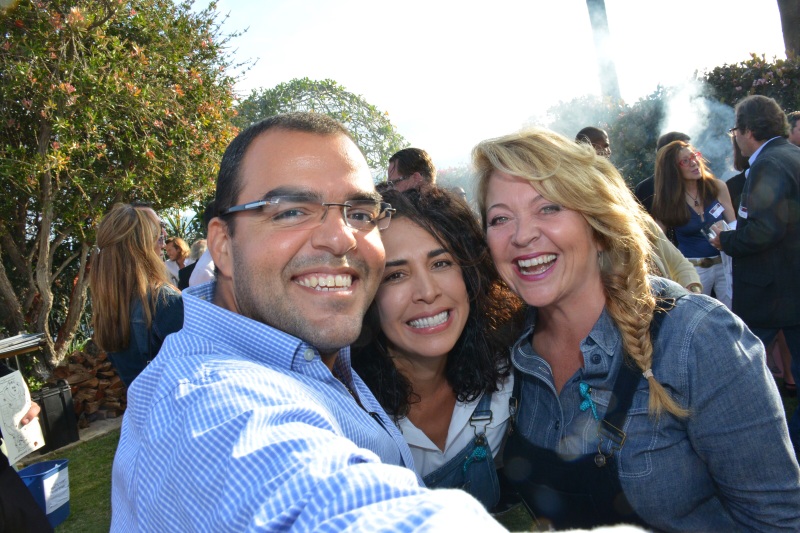 The vast expanse of property overlooking the ocean serves as a comfortable picnic-like setting that inspires heart-to-hearts, enlightenment, and dialogue. Some of the goals? To spark conversation & education about our region’s sustainable food system, and maybe even, creating a model that should and can be replicated in other cities.

More and more people are interested in where their food comes from. It’s a priority, a philosophy and a choice. More than a few local chefs and restaurant establishments have been at the forefront of this trend, diligently sourcing local/sustainable/minimally processed…and in some instances, creating their own gardens, showcasing farmers, growers and sources of their products. A Berry Good Night allows each of us to become educated, ask questions, and create synergy to build healthier communities. It’s important to know where your food is coming from, and the Berry Dinner highlights this and much much more!

The buzz was abound as the night of the dinner neared. You could “feel” the excitement. It’s an excitement that’s been cultivating for a while! On Berry Good Night’s social media page it was reflected in smiles as volunteers donated their time and as participants met up to donate product. You could see the enthusiasm in the posts of chefs as they received locally sourced ingredients to be used in the dinner. From Sage Mountain Farm donating arugula and spring onions for chefs, to strawberries from Be Wise Ranch being used in the dessert of this dinner by Lori Sauer of George’s at the Cove. Ingredients from farms and growers in San Diego making their way to chefs all around the county and region.

The energy was noticeable as we checked in, strolling down the driveway to see many a familiar face  – starting with Matt, co-founder of craft brewery Duck Foot Brewing Co, who offered us his gluten-free raspberry saison  – Rad & double Rad! Further down the path, we encountered Carlsbad based Prager Brothers Artisan Bread –  two brothers who hand mold organic, whole grain bread – and talk about pretzel pleasure. They had them on hand for us to devour! I had to remind myself to slow down and pace myself –  talk and nibble! Talk and nibble! 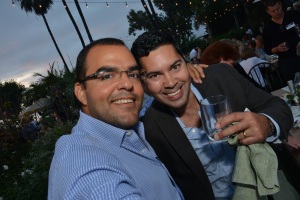 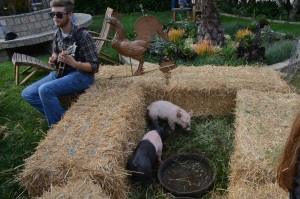 Food stations signifying collaborations between chefs, farmers and ranchers were strewn about the property as we made our way to the alberca and el jardin! A beautiful sight indeed! 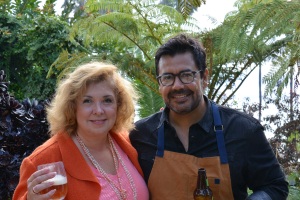 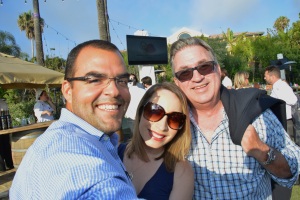 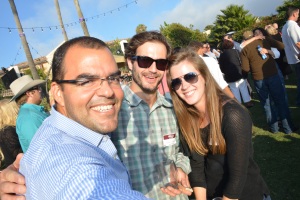 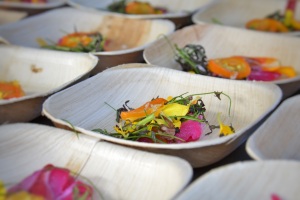 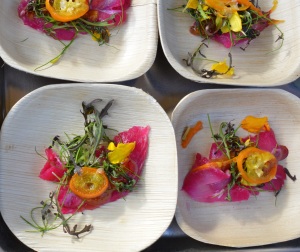 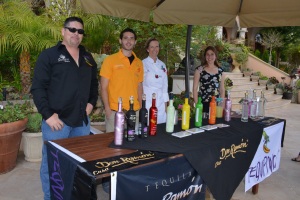 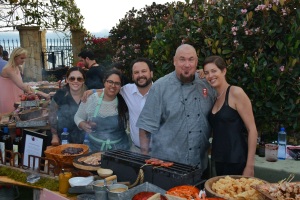 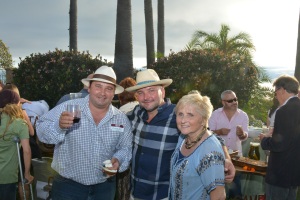 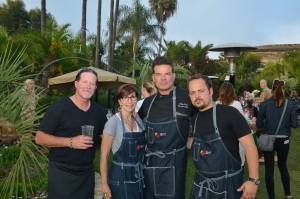 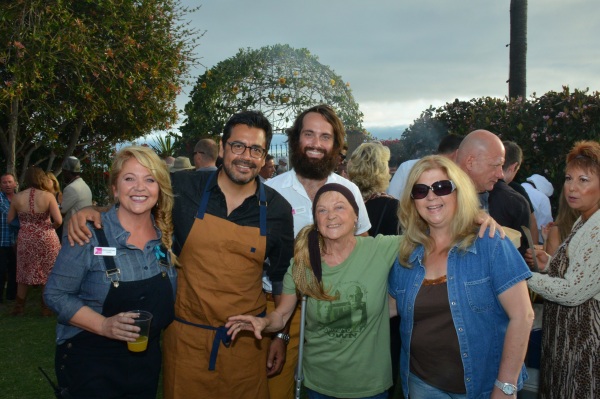 After cocktails and tasting stations, and hellos, we made our way to rotating communal dining tables. Designed for us to sit down, enjoy fabulous dishes prepared by some extraordinary people, become friends with your tablemates, rotate to the next table (silverware in hand) and repeat!!! And we had some great people to meet!!! 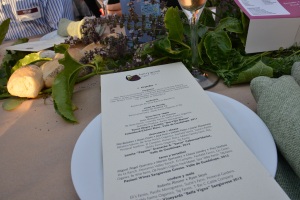 Some of the awesome peeps at our table!

This couple treated us to a great story, having been a part of the dinner when it numbered only 75 guests! Born and raised in Chula Vista, and post-NY stint as musician and chef,  Nick found his way to a restaurant in Idyllwild. On his daily commute to/from San Diego, he stopped in Temecula and fell in love with the idea of wine in Southern California. In 2002, he and Cindy, opened up their winery, where she is in charge of raising her own animals/veggies for personal use! Their San Giovese wine graced us at the dinnertable!

Spur Valley Ranch quail was showcased in one of the table served dishes! Andy told me how their family has always raised their own rabbit and quail, which led to them establishing a strong following at farmers’ markets about seven years ago, and currently they focus on they selling direct to Chef/people. Andy and Christina, now married, met at a Berry Dinner 3 years ago!! Christina is a chef, who now, along with other chefs and greater audiences, prefers Spur Valley Ranch. During our conversation, it turned out my wife and I enjoyed their quail at the Baja Dinner at The Red Door Restaurant and Wine Bar with Chefs Karrie Hills & Flor Franco not too long ago. 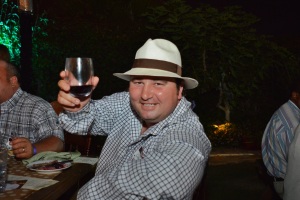 These 2 brothers head up their biodynamic farm in Descanso Valley specializing in seasonal heirloom varieties. Like other farms, their product was used in several dishes and stations, including Jack Ford/Taj Farms’ charcuterie + cheese station. Established in 2010 with 1 acre, numbering  10 acres today, they are pesticide and organic fertilizer-free! Their passion is notable ! El Campito Farms has a CSA/Farm-to-Home program and also work with schools with a similar program allowing schools to fund-raise with a farm-to-school alternative, where parents can pick up their bag while picking up their children! Some of the crops now in season? French grey shallots, spinach, lettuce and heirloom tomatoes! 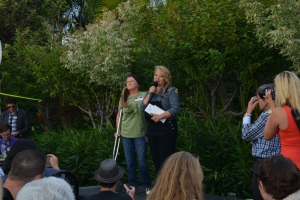 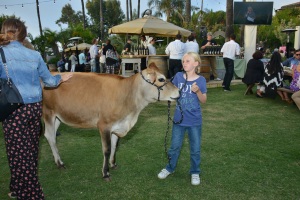 At the end of the night the host announced that building upon the success of the Berry Good Night Dinners, a Berry Good Food Foundation has now been created to deepen collaborative efforts and help with social initiatives throughout the region!! Exciting stuff!!! If you’d like to be a part of it, make sure you sign up! http://berrygoodfood.org/

Thank you to all of the people who made this night possible! We ended the night with a goodie bag filled with local producers’ treats!! As I glanced in the bag, I caught a glimpse of a couple treats, made by some local peeps!! Andrea’s Truffles (left) pulls through with her truffles and Cardamom Cafe & Bakery (right) hit the spot with a Blueberry Kouign Amann, which of course didn’t make it home… 😉

p.s. You can find a list of all people involved here!! http://www.berrygoodnight.com/